The prevalence rate of dementia, or the proportion of people living with dementia, is decreasing.  Yet, the number of people with dementia is set to double by 2050, according to a new Alzheimer Europe report out last week[1].

Over the past three decades, several significant pieces of work have been undertaken to estimate the prevalence of dementia in Europe. The most recent of these studies was over six years old. Alzheimer Europe – a non-profit organisation representing 39 national Alzheimer associations across 35 European countries – decided a more current head count was needed. They analysed the combined results of 16 dementia prevalence studies that met predefined quality criteria, such as a minimum sample size of 300 people and the use of a standardised diagnostic procedure. The selected studies were published between 2008 to 2018 and spanned ten countries – Belgium, Bulgaria, Greece, Italy, Luxembourg, Portugal, Spain, Sweden, Turkey and the U.K.

A Healthier Albeit Ageing Population

The review found that there had been a decline in dementia prevalence over the past ten years when compared to 2008 estimates. People living healthier lifestyles, better education, and improved control of cardiovascular risk factors has likely contributed to this. However, people are living longer, and age is the single most significant risk factor for developing dementia.  For this reason, the report found that the number of people living with dementia is expected to almost double by 2050. Specifically, the current estimate of 9.7 million people in the wider European region living with the condition, has been predicted to rise to over 18.8 million people. 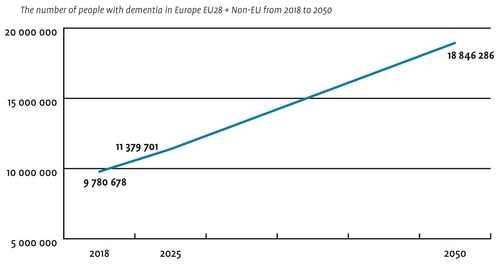 The report also highlighted several limitations regarding the available evidence. The organisation found little research into how many people aged under 65 years have dementia; and nor was there much reported on the prevalence of dementia in people from ethnic minority groups. The authors also emphasised little research into the number of people at each stage of dementia, or with different types of dementia.

Overall, the number of people living with dementia will increase substantially in the years ahead. If there ever seemed a time to invest in dementia research, it appears to be now.

⟵ Back to all news

Please note: This service is in the early implementation phase. Find out more.